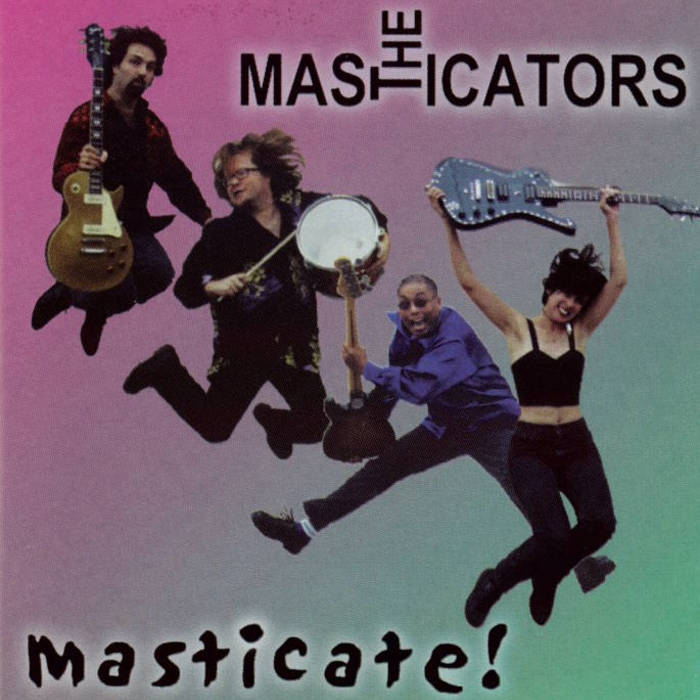 Mystery Train Sunny underground pop from LA that should have had a wider following. Since this is the band's complete oeuvre, you also get covers (Devo, Replacements) and radio segments. Favorite track: Now That You're Gone.

Gary Lisker So psyched to see this here. I spent weeks searching for the CD on ebay. Now you don't have to.

From the opening fade-in beats of "Intro," the debut album by LA's the Masticators is a nearly perfect example of how terrifically, powerfully great three-chord pop can be. Lisa Mychols writes songs that are not only potent pick-me-ups with immediately infectious and memorable melodies but also witty and sustentative on top of it. She is almost as strong a lyricist as melodist, evident on the gorgeous ballad "The Rain," but she never allows the higher aspirations of some of her words to trump her knack (which could easily double as an apropos pun, for those cognizant of LA pop) for writing huge hooks. Mychols seems to have definitely paid attention to those first few Pretenders LPs in terms of songwriting and style, if not necessarily Chrissie Hynde's sexually suggestive growl. Her singing most closely recalls Susanna Hoffs on the bulk of the album, which, if you think about it, is a dreamy combination. But there are plenty of other musical references throughout, particularly the Go-Go's, Elvis Costello, Phil Spector's girl groups, Blondie, and '80s new wave, the aforementioned Knack, the Muffs, and bubblegum music. Mychols, it has been noted, even sounds like a milky-smooth facsimile of Karen Carpenter on the lovely "Help Me Dream," although that is atypical. The band, for its part, plays the hell out of the songs. Patrick McGrath keeps his guitar solos short and sweet, while padding up songs like "Never Try" and "Rain" with keyboard contributions and even ably taking co-lead vocals on the album-closing cover of Devo's "Uncontrollable Urge." The rhythm section is never short of brilliant. Severo's fuzz-bassline on "Here's a Boy" is worth the price of admission alone, while Rist is, simply put, the perfect power pop drummer, flailing away at his kit on high-octane songs such as "Now That You're Gone" and "Radio Police" like some sort of wild cross between Mitch Mitchell and Clem Burke. He also co-produces the album with Steve Refling, and the duo engineer the music to closely resemble the close-quarters explosiveness of a live show. Nearly every song is wonderful but several stand out. Intriguing calypso rhythms pop up on "He's the One (Island Version)," something of a rewrite of Blondie's "Tide Is High," while "He's Coming Out," co-written with Wondermints member Mike D'Amico, opens with a Byrds-like acoustic 12-string riff before jetting into sassy ebullience, with a fabulous brief guitar solo from Rist. "Day to Day," on the other hand, sounds so much like late-'70s Laurel Canyon-style country-rock that it wouldn't have sounded out of place on a Linda Ronstadt album from the period. Masticate!, though, has one quality above all others: obscene fun. If radio police really did exist (and we can dream, right?), they could arrest most of the lesser pop bands clogging the airwaves at the beginning of the 21st century to clear plenty of space for the Masticators. Unfortunately, this is probably destined to remain underground music. But it would certainly be a crime for any lover of power pop to pass this album by. - AMG

The Futureman only finds and releases the most vital and raw recordings from the field. He asks for no thanks or special notice. However, tip your hats or raise your glasses their way: Futureman Records, The Vanguard of the People.

Bandcamp Daily  your guide to the world of Bandcamp